‘Do you think it’s safe to take your child into lion country?’

After his parents die on safari, a young child is reared in the jungle by lions. Many years later, he attacks the compound of a rancher who has teamed up with a hunter to kill the big cats in the area to protect his cattle. But the ‘Lion Man’ is captured and sold to a circus owner along with the animals…

Olympic swimming gold medallist Larry ‘Buster’ Crabbe missed out on the lead in ‘Tarzan, the Ape Man’ (1932) but was almost immediately snapped up by Paramount to take the title role in this competing production. However, what initially looks like a dreary rip-off develops instead into a film with its own identity, thanks to directors H Bruce Humberstone and Max Marcin, and a better than average script, to which Marcin also contributed.

What was it with African explorers back at the start of the 20th Century? Were their parenting skills so poor that they thought it was OK to drag their infant offspring into the unexplored regions of the dark continent? It seems so, as here we have two more examples of the breed, Robert Adair and Florence Britton, picking up a permit to travel through the depths of the Kenyan jungle with their young son. One nifty cut of an editor’s scissors later and the permit is tattered and lying on the grass in the wreckage of a campsite stalked by lions. The sole survivor is the couple’s boy (Ronnie Cosby), who is too young to understand what has happened but old enough to play with lion cubs. Fast forward a couple of decades, and he’s grown into Larry ‘Buster’ Crabbe in a leopard-skin loincloth, a full-time member of the pride with no memory of his previous life and no knowledge of the ways of man. 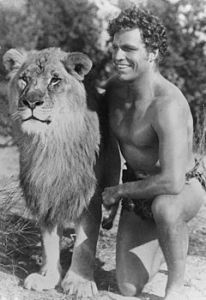 Flash liked to hang out with his buddy Thun at every opportunity.

But there’s trouble in paradise. Rancher Ed Peters (Douglas Dumbille) has decided to take action to protect his herd from the ravages of the local cats. Great White Hunter Joe Nolan (Robert Barrat) has a notion to cage the beasts and sell them to circus owner Neil Forbes (Sidney Toler). A native hunting party kills a lioness and takes her cubs back to Dumbrille’s compound, and it’s game on. Crabbe releases the cattle from their pens one night and the sceptical Dumbille sets a trap for him, encouraged by Barratt. They capture half a dozen lions and get Crabbe as a bonus, Barratt selling him onto Toler, who intends to exhibit him as ‘Kaspar, the Lion Man.’

So, after less than half an hour of the picture, Crabbe is frightened off to San Francisco to appear as the leading attraction in a circus; a development which foreshadows the fate of the somewhat hairier ‘King Kong’ (1933). He escapes on arrival when an over-zealous customs man unlocks his crate and, after a dip in the bay, he fetches up in suburbia, dodging automobiles, scaring old ladies in the park and tangling with the cops. All this activity prompts a ‘calling all cars’ police bulletin, and he’s on the run when he arrives at the home of schoolteacher Frances Dee. She doesn’t approve of his shocking table manners or efforts on the piano, but she takes pity on him anyway. A bond has been formed and, when the circus leaves on tour, Toler persuades Dee to come along and look after his prize asset. 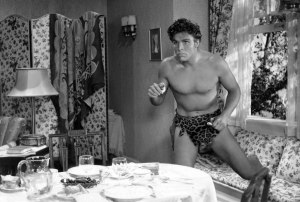 The rapid development of the story from what looks like a dreary ‘Tarzan’ riff into a circus drama and romance confounds expectations and is to be applauded. Similarly, instead of Toler proving to be the slave-driving villain of the piece, he’s a somewhat reasonable guy, if you can forgive him for buying Crabbe in the first place. The Lion Man gets well-paid for his work, lessons in his letters from Dee and treated like any other employee of the show. His facility with the big cats makes him the show’s main attraction, of course, and he plans to buy back the lions when he has enough money and repatriate them. Not a plan to find favour with Toler, but does the circus owner descend to dastardly plots and schemes to stop the Lion Man? No, he just tries to talk him out of it, sees it hopeless, and accepts it. It’s this refreshing absence of expected melodrama in all departments that means the picture has aged surprisingly well.

The drama focuses instead on Crabbe’s attempts to adapt to civilised society and, although this never delves too deeply, it’s a pleasingly modern approach. Crabbe was a very inexperienced actor at this point in his career and, perhaps it’s this lack of formal training that results in an absence of the more exaggerated flourishes and affected manner of some actors of the period. Dee is also a charming foil and, although their scenes together may not fizz with chemistry, their relationship comes over as quietly engaging. 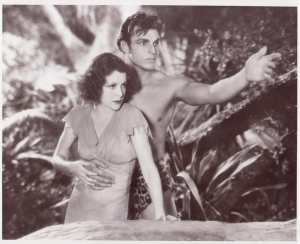 ‘…and over there is the Santa Monica Freeway…’

Our leading man also deserves some credit for his work with the lions. He gets up close and personal with them on more than occasion, although it’s highly likely that a double was used for some shots. Still, a rehearsal with one of the big cats went south when it nipped his leg, resulting in a ‘severe laceration’ and a trip to the local emergency room. Animal lovers should be a little cautious too; the rumble between a longhorn and a lion may have been just play, of course, but it’s reasonably certain that the Animal Humane Society weren’t around to monitor the action.

Crabbe was, of course, only three years away from a blonde makeover and screen stardom as ‘Flash Gordon’ (1936). His appearance in the serial, and it’s two sequels, may have typed him in the lower end of the talent pool, though, which was unfortunate. Although he could never be considered a great actor, he was still a strong and very natural screen presence, who usually acted circles around his co-stars on the subsequent, low-budget projects in which he appeared. 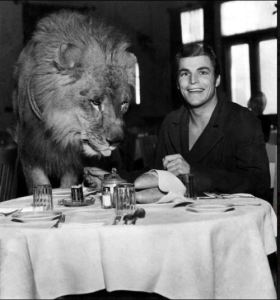 Dee was also an underrated performer, who seems to have been destined for big things at one point after major supporting roles in ‘An American Tragedy’ (1932), ‘Little Women’ (1933), ’Of Human Bondage’ (1934) and ‘Becky Sharp’ (1935). But she married western star Joel McCrea in 1933, and it seems that she was never very ambitious about her career, taking what’s arguably her best-known role in producer Val Lewton’s ‘I Walked With A Zombie’ (1943) apparently so she could buy her mother a car.

A surprising spin on the more typical ‘ape-man’ tale. The different story elements make for a decent drama, even though it never seeks to address some of the deeper themes and questions that it raises.