‘Why don’t we talk about the construction of the tennis court?’

A shipwreck survivor washes up on a rocky, barren island. The only sign of habitation is a group of strange buildings, which appear to have been abandoned years earlier. Later on, he sees couples dancing to an old gramophone on the edge of a cliff, but when he approaches one of the group, she simply ignores him.

Unusual Italian science fiction project directed by Emidio Greco and based on a novel by Adolfo Bioy Casares. From the very beginning, the film refuses to pander to the audience, providing no information to pinpoint the story location, time period, or the identity and circumstances of main protagonist Giulio Brogi. lt’s an approach that’s quite refreshing in an era where films often open with lots of exposition, provided either via captions or a narrative voiceover. Here, not a word of dialogue is spoken in the first half hour of this film, and it’s a tribute to Greco’s talent as a director that he keeps the audiences invested in our castaway’s plight.

Part of the credit for this has to go down to the ‘look’ of the film and its technical accomplishments. The Maltese location is quite striking and its timeless quality is emphasised by the superbly crisp photography of Silvano lppoliti, whose long career involved projects for directors such as Riccardo Freda, Sergio Corbucci and Tinto Brass, including the notorious ‘Caligula’ (1979). Whether the buildings were constructed specifically for the purpose of the film or already existed is unclear, but they are certainly impressive and credit should also be given to Amedeo Fago for the production design of the interiors.

As the film progresses, Brogi becomes more and more bewildered, the island’s occupants seeming to be a weekend party who dress in 1920s fashions, look right through him, and carry on the same conversations over and over again. They even dance to their gramophone in the middle of a rainstorm. All the while, he is falling for the beautiful Anna Karina, who also seems to be the target of their host, the steely Morel (John Steiner).

After some time and no further story progression, the audience can be forgiven for suspecting that nothing is going to be resolved and what they are witnessing is an exercise in pretension, which will need intellectual film critics to explain. But this is not the case. The answer to the mystery does come, and it is surprising and quite original. Unfortunately, it doesn’t really leave the story with many places to go afterwards.

The Ritz had gone downhill since his last visit…

Greco was undoubtedly aiming for a very slow burn and, while the film has a strange fascination, it doesn’t really have enough story for its 110 minute length, and some judicious tightening would have helped. The lack of information about our leading man (we don’t even ﬁnd out his name) and a low key performance from Brogi makes emotional connection with him a little difficult, and that’s crucial considering the film’s last act.

Karina was famous as a muse for 1960s ‘new wave’ film director Jean-Luc Goddard, appearing in ‘Alphaville’ (1965), ‘Bande à Part’ (1964) and several of his other films. Steiner was an English actor based in Italy and has an incredibly diverse filmography, credits including the afore-mentioned ‘Caligula’ (1979), horror maestro Mario Bava’s last film ‘Shock’ (1978), Dario Argento’s ‘Tenebrae’ (1982), and many ‘direct to video’ projects in the early 1980s. He also stole the show as the over the top villain in the wonderfully ridiculous ‘Sinbad of the Seven Seas’ (1989) with ‘Incredible Hulk’ Lou Ferrigno.

An intriguing setup and some memorable images make this one well worth seeking out. However, the slow pace means it’s certainly not for everyone.

‘Hang on to your jollies, we’re going after him!’

Two British officers in the Philippines in the 1940s tangle with a murderous cult while trying to retrieve a relic with supposedly supernatural powers.

Cheap and cheerful Italian knock off of ‘Raiders of the Lost Ark’ (1981) with swashbuckling David Warbeck punching, shooting and quipping his way from one life threatening danger to the next in his search for ‘The Golden Cobra.’ Not only is the statue a rallying point for a sinister group of local fanatics, it’s also apparently the key to immense riches. This means Warbeck gets saddled with treasure hunter Luciano Pigozzi and his niece, Almanta Suski, whose long lost twin sister just happens to be the high priestess of these snake-worshipping villains. Also along for the ride is John Steiner’s upper crust British Intelligence officer, who provides some much needed comedic moments.

The film tries hard to deliver the same level of thrills as its (obvious) inspiration, and the paper-thin plot is little more than a vague excuse for a series of fist fights, car chases, gun battles and last minute escapes. Unfortunately, director Antonio Margheriti (working under his usual alias of Anthony M Dawson) didn’t have a Hollywood budget to work with so there is little notable stunt work or big set pieces. There’s an attempt at a big, fiery finish, but it’s more of a damp squib than anything else. And that’s the film’s main weakness. There’s no dynamism to the action on offer and a complete lack of style in the delivery.

His new piece of performance art did not meet with widespread approval.

Marghetti was actually a director with a long pedigree in fantasy cinema; ‘Assignment Outer Space’ (1960), ‘Wild Wild Planet’ (1965) and ‘Killer Fish’ (1979) to name but a few of his outlandish pictures. A year after this release, he reunited with Steiner and Pagozzi for the spectacular chuckle fest and guilty pleasure that is ‘Yor, The Hunter From The Future’ (1983), but there’s little of that level of entertainment here.

The explosion of home video rental in the early 1980s was the ideal market for a project like this: put some colourful artwork on the video box, take a couple of ‘name’ actors slumming it, and mix them into a plot reminiscent of a current hit of the time. A sound business plan, but the results here are stubbornly unremarkable. 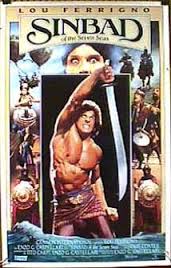 ‘Not Prince Ali, nor Sinbad, a man I hate more than hate itself, will stand in the way of me and my heart’s desire!’

Sinbad returns to the city of Basra, and finds his old friend the king enslaved by the evil court vizier Jafar. The wizard also has designs on the blushing bride of the sailor’s good friend, Prince Ali, and has scattered some magic crystals to the far corners of the kingdom. Sinbad must quest for the gems before he can return to Basra and put Jafar in his place. For some reason.

This movie started life as a 4-part TV mini-series with Luigi Cozzi (‘Starcrash’ (1979), ‘Hercules’ (1983) with Lou Ferrigno) slated to direct. But he walked away for reasons unknown and the project fell into the hands of Enzo G Castellari, a low-budget filmmaker since championed by director Quentin Tartantino. What happened next isn’t confirmed but it seems highly probable that financing collapsed after production began. What is known is that the footage gathered dust on a shelf for a couple of years before Cozzi was rehired to try and salvage something out of it. Fortunately, he had both a beginning and an ending, both of which had been shot on the impressive palace sets. Also the principal actors had already looped a lot of their dialogue. Unfortunately, the middle section was fragmentary; completed scenes that made no narrative sense whatsoever.

So what was Cozzi to do? Bring in Voiceover Man of course! Or Voiceover Woman in this case: Daria Nicolodi, who Cozzi filmed in a wrap-around sequence where she tells the tale as a bedtime story to her young daughter. Unfortunately, the device is so over-used that it quickly becomes very annoying; Nicolodi often providing a running commentary on what we’re seeing on the screen. Sometimes she even talks over the actors, but that was probably because they had never looped those particular scenes. Cozzi also inserts some footage from a 1964 Hercules movie to help explain the plot and slaps a ‘based on a story by Edgar Allan Poe’ credit on the finished article. This isn’t actually as silly as it sounds, Poe did write a ‘Sinbad’ story (‘The Thousand-and-Second Tale’) – it just wasn’t this one. Rather brilliantly, Castellari knew about none of this, and only became aware that the film had been released at all when he found it in his local video rental store!

Obviously, these are all problems enough, but, even worse, is the inconsistency of tone. Is it supposed to be a comedy? It’s a hard question to answer. The main point in favour is the dialogue. The film was obviously shot in English and, although you expect some gags and banter in a Sinbad movie, what you don’t expect are modern American colloquialisms and phrases. ‘No dice, huh?’, ‘You missed one hell of a party’, ‘Have you taken your medication today?’ and ’Don’t you worry, I’ll give it a shot’ are just a selection of what we get here. It’s hard to believe this wasn’t deliberate, but it simply plays like a poor translation of something written by a non-English speaker. A translation that was done in a hell of a hurry and never rewritten. There’s also some head scratching non-sequiturs which give weight to this theory. Also coming down on the side of the comedy explanation is the performance of John Steiner. His Jafar is a glorious mixture of incredibly silly faces, and a ridiculously over emphasised delivery. He looks like he’s having the time of his life.

‘And the Oscar goes to…’

And thank god we have Steiner because the rest of the principals are a dull bunch. Sinbad is ‘Incredible Hulk’ Lou Ferrigno who flexes his pecs and tries hard in poorly staged action scenes, including a fight with skeletons cribbed from ‘Jason and the Argonauts’ (1963). Unfortunately, he’s saddled with a silly 1980s mullet, cheap cartoon SFX, and a crew of the usual suspects;  handsome prince, Kung Fu Charlie Chan, cowardly brain box, and (supposed) comedy dwarf.

Wilting princess Alessandra Marrtines married famous French director Claude Lelouch, 26 years her senior, and had a successful acting career on the continent, taking the lead in ‘The Cave of the Golden Rose’ movie series and playing Elise opposite Jean-Claude Belmondo in ‘Les Miserables’ (1995). After her divorce from Lelouch, she settled down and had a second family with a man 20 years her junior.

A film that will puzzle you (what were they thinking?), bore you (shut up, woman!) but make you laugh out loud too, thanks to Steiner who is simply on fire. It’s a strange combination to be true but well worth a look for lovers of bad film.