‘The atomic controller will allow me to manipulate the reanimated corpses as I fancy.’

A scientist conducts experiments in his laboratory to bring corpses back to life, turning his failures into wax figures to exhibit in his museum. When a local newspaper runs a story about the exhibition of an ancient mummy, he kidnaps the artefact intending to use it as his latest subject. Unfortunately, a lightning strike transforms it into a living werewolf…

Monsters had begun infiltrating Mexican cinema as early as the 1930s but only took a firm grip on the domestic box office with the runaway success of Abel Salazar’s ‘El Vampiro’ (1957), which borrowed heavily from Universal’s ‘Dracula’ (1931). Several similar projects confirmed the public appetite for the formula, but the producers of this film went one better than their rivals. They hired the genuine article; horror icon Lon Chaney Jr, who reprises his turns as both the Wolf Man and the Mummy here, even if the film is actually more of a showcase for popular comedian Germán ‘Tin Tan’ Valdés.

Local beauty Paquita (Yolanda Valera) is having quite the time of it, juggling two jobs and four potential boyfriends. First thing in the morning, she’s up and running the morning shift at her Aunt’s cafe, before she off to her other job as receptionist to head shrinker psychiatrist Dr Salazar (Óscar Ortiz de Pinedo). Her breakfast regulars include Profesor Sebastián (Yerye Beirute), who runs the local wax museum, and his two assistants, Rito (Agustín Fernández) and Nacho (Alfredo Wally Barrón). There’s also charming layabout Casimiro (Tin Tan) who eats like a horse, owes money on his bill and works during the day as de Pinedo’s janitor(?) and as Beirute’s watchman in the early hours. Apart from eating, he spends most of his time asleep, although that may have something to do with being Beirute’s convenient blood bank. All four guys are in love with Valera, but she only has eyes for the rascally Tin Tan.

‘Don’t be such a baby, it’s only a little filling.’

What our bickering lovebirds don’t know is that Beirute and his gang are behind the recent plague of body-snatching as the good Professor requires raw materials for his hobby of trying to resurrect the dead. Once he succeeds, he can conquer the world with his zombie army, but things aren’t going well, and the corpses are piling up. For reasons never addressed and with methods never shown, he turns all these failures into wax statues in his museum, creeping out the nervous Tin Tan. News of the arrival of an ancient mummy (Chaney, in surprisingly effective makeup) gives Beirute new hope. Legend has it that the old guy has returned to life several times over the years, even sometimes turning into a werewolf! It’s because of some kind of curse or other; don’t worry about it.

Beirute decides that Chaney will be the perfect subject (especially after a brain transplant!) and the terrible trio kidnaps him during a press conference. Yes, this sit in plain sight at the front of the gathering, wander back to turn the lights off and then just rush the stage. Strangely enough, their elaborate plan sees them chased by the police but they get their prize back to the lab for another try on the slab. But even putting the horror legend in a centrifuge doesn’t work, until the lab is struck by lightning later than night. Then Chaney revives, turns all hairy, and the fun begins. Eventually, he ends up with Barrón’s brain, goes on a rampage and kidnaps Valera, all of which at least provides some logic behind the monster carrying off the girl, which makes for a refreshing change.

‘I wonder what’s for lunch.’

None of this should be taken seriously, of course, with director and co-writer Gilberto Martínez Solares content to sit back and let Tin Tin’s amiable clowning carry the day. But, having said that, there’s some nicely atmospheric black and white photography from Raúl Martínez Solares and Chaney’s full moon transformations are tolerably well done, even if it is just the usual series of dissolves with increasing face fur. The final look of the lycanthrope is a pleasing throwback to Jack P Pierce’s work on ‘The Wolf Man’ (1941) and Chaney even gets to wear the shirt and slacks combo favoured by Lawrence Stewart Talbot. Unfortunately, the script gives him nothing on which to base a performance, just a scene where he looks distraught and utters one barely articulate word of dialogue. Although only 54 at the time of filming, he looks a good decade older, his once handsome face ravaged by the effect of his chronic alcoholism. Much like his career, sad to say.

The film itself is a breezy enough inoffensive comedy, even if it does begin to run out of steam towards the end. The final scenes of Chaney (or more likely his stunt double) on the rampage are a little curious, though. Savaging passers-by with a bit of accompanying gore doesn’t really provide all that many belly laughs, although it’s pleasing that matters don’t descend into the infantile shenanigans favoured by many so-called horror comedies. There’s also a bizarre sequence where Tin Tan and Valera give us a quick song and dance routine in the darkened museum, but such eccentricities are pretty common in Mexican genre cinema. Elsewhere, there’s a surprisingly effective performance from Beirute who even resembles a young Boris Karloff in some shots. Perhaps that’s why he was cast in the role. 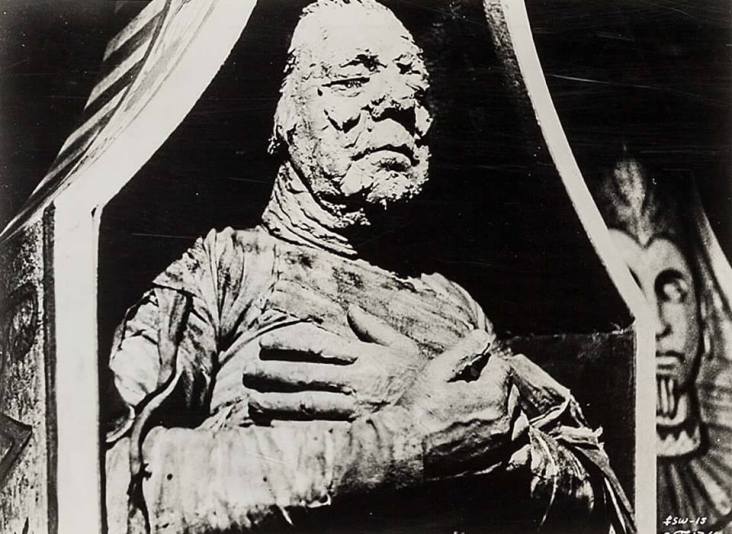 Catching 40 winks in a sarcophagus was never a good idea.

Rather appropriately, the film receives its own resurrection a few years later in the hands of legendary bad filmmaker Jerry Warren. He’d already secured the rights to ‘La Mommia Azteca/The Aztec Mummy’ (1957) and repurposed footage from it (along with some of his own) as ‘Attack of The Mayan Mummy’ (1964). But why stop there? Taking material from both those efforts, he sticky-taped them together with the mummy and wolfman scenes from this film and retitled this cinematic collage ‘Face of the Screaming Werewolf’ (1964). He even added a brief new bit of two cops at the end, filmed on vastly inferior film stock. As you can imagine, it was completely seamless and an absolute triumph.

Lightweight and mildly enjoyable horror-comedy, but, of course, the main interest today lies in seeing Chaney Jr getting his furry face on for the big screen one last time.