‘Quick, give me five of your flimsies!’

An honest young bank worker is framed by a criminal mastermind who has designs on his young fiancé. When he gets out of prison, he finds it hard to get honest employment and his diabolical nemesis has other plans for his immediate future anyway…

British horror pioneers Tod Slaughter and producer-director George King are up to their old tricks again, wheeling out another ‘blood and thunder’ melodrama for the delight of pre-war audiences in old Blighty. This time they’re adapting an old theatrical warhorse by Tom Taylor, mixing a cocktail of murder, crime and rotten skulduggery in the underworld of Ye Olde London Town.

After letting mysterious arch-criminal The Tiger slip through his fingers at the cost of the lives of two his men, Hawkshaw the detective (Robert Adair, with impressive facial hair), drops into the Belle Vue Gardens for a drink. If this seems a little insensitive, to be fair, he is mainly there to check with one of his undercover men. Why this officer is staking out a beer garden is a little puzzling (as it seems an eminently respectable establishment), but it turns out to be a shrewd move. At a nearby table, the Tiger (Tod Slaughter) is plotting with counterfeiter Melter Moss (Frank Cochran), and there’s also May Edwards (Marjorie Talyor) singing ‘from the rotunda’. You won’t want to miss that. 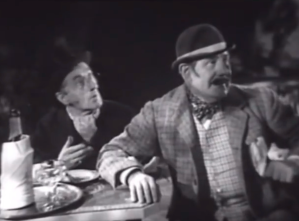 ‘Look up there! In the rotunda!’

Slaughter is there to buy forged banknotes from Cochran, but in typical Slaughter fashion, he’s much more interested in lusting after songbird Taylor. I mean, who could resist a pretty gal who sings from the rotunda? But, of course, she’s already spoken for; making wedding plans with the handsome Robert Brierley (John Warwick) between numbers.

Also present at the evening’s festivities is banker Joshua Gibson (Peter Gawthorne) and the onsite cigar concession is run by Mrs Willoughby (Jenny Lynn, the real-life Mrs Tod Slaughter) and her young son, Sam (Arthur Payne). Add the Gardens’ proprietor, Maltby (Norman Pierce), and you have the entire principal cast all in one place at one time! How convenient. I guess it’s a small world, after all. Warwick and Taylor are planning to use his savings to buy furniture, but Slaughter cunningly switches the cash for some of Cochran’s ‘flimsies’. A quick word in Adair’s ear later and Warwick is arrested as the notorious ‘bank forger.’ End of Act 1.

Some time has passed (how much we don’t know) but Slaughter is now installed as Mr Pybus, head of ‘The Good Samaritan Help Society’, complete with the obligatory hidden passage behind a revolving bookcase. This is a supposedly charitable institution that helps ‘ticket of leave’ men into employment after they get out of prison. The stigma of jail time means these early versions of parolees either can’t get work or are dismissed as soon as their past is revealed. So it’s hard to see how the society can help anyone without lying to prospective employers, but Slaughter’s only running it so he can recruit a network of criminals, so I guess it doesn’t matter too much.

Of course, Warwick’s file comes across his desk (apparently, being the notorious ‘bank forger’ doesn’t carry a significant custodial sentence). While he’s been away, Taylor, Lynn and young Payne have moved in together, lodging in a property owned by Gawthorne. Taylor and Warwick have to pretend to be brother and sister, and he gets a job working at Gawthorne’s bank by being less than honest with his application. Slaughter has designs on the assets of this financial institution, of course, and has already ingratiated himself with Gawthrone. Told you it was a small world!

Although it could reasonably be assumed that after four previous such projects, that the familiar Slaughter-King formula might be getting a little tired by now, the opposite proves to be true. This is their most fully realised film to date, and, given that these were low-budget productions made to fill a quota imposed on the industry by government legislation, King manages to inject proceedings with a much larger feeling of scope. For once the story seems to be taking place on a wider stage, even if the story hangs on a lot of convenient coincidences and the action takes place over a limited number of indoor sets.

Sure, the principal character dynamics are the same as ever, what with the predictable love/lust triangle between Slaughter-Warwick and Taylor. However, this conflict does provide proceedings with some of its delicious highlights. Slaughter carries Taylor from the Belle Vue Gardens to cover his escape after she’s fainted, but can’t resist stealing a kiss or two while she’s still unconscious! What a cad! Later on, he catches the supposed brother and sister in an intimate liplock. ‘I had no idea relatives were so affectionate,’ he purrs. The familiarity does have its downsides, though, with banker Gawthorne just filling in for the absent D J Williams. The script may not cast him as Taylor’s actual parent, but his character serves precisely the same purpose.

Ultimately, what we’re here for is Slaughter, though, and he’s as wonderful as ever. He can’t even walk through a door without looking suspicious, and the script by H F Maltby (adaptation and dialogue) and A R Rawlinson (scenario & additional dialogue) provide plenty of opportunities for him to strut his stuff. 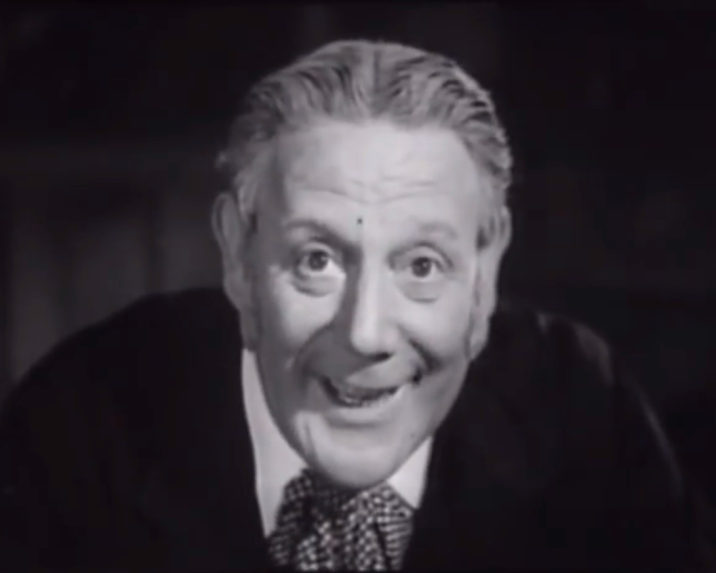 There are weaknesses, of course. There’s a hurried feel at times with a lack of transitions giving no idea how much time has passed at various points along the way. Gawthorne gives Warwick a job in his bank at the bottom of the ladder and less than five minutes later is promoting him to the position of his personal, confidential clerk. Similarly, events crowd together in the last ten minutes for a helter-skelter climax that includes murder, arson (with murder), a bank job, a detective in disguise and Slaughter’s inevitable descent into cackling madness.

Since his last film with King, Slaughter had taken on a couple of other big-screen gigs; as a lecherous gypsy in countryside ramble ‘Song of the Road’ (1937) and as Mr Templeton in the lost film ‘Darby and Joan’ (1937). Slaughter hadn’t adapted his acting style for the former, an otherwise gentle celebration of simplicity and rural life, and his turn had been distinctly out of place. He was to stick to melodrama for the rest of his brief screen career.

This is a highly enjoyable melodrama that takes the familiar elements of the King-Slaughter output and delivers them in a neater and tidier format, providing plenty to chew on for fans of the charismatic lead.

Tod Slaughter would return in ‘Sexton Blake and the Hooded Terror’ (1938).